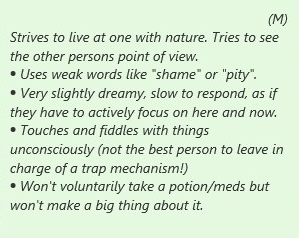 This is part 3 in a series:

Locations (part 2) do not make for an exciting role playing experience. You and your players want to role play and for that you need ‘people’ to interact with. Your players never get to see stats and number, although they may feel them at the end of a sword thrust! What you players experience is the NPCs personalities.

This technique works as well for players as it does for game mastery. I will describe it first from the player perspective, and then how you applying as a game master.

You sit down to play your favourite game, probably your one game night of the month. You get your character sheet out and ask yourself “Who am I?” The answer could be any number of things, a ranger, Lord of Grimdark, and insecure social climber? These can all refer to the same character. Only the last one is going to help you get into character.

Here is the suggestion. On the front of your character sheet, put a green sticky note containing a short pen portrait of your characters personality, a few turns of phrase and a mannerism or two. Now just reading that single small note gets you straight into character. Things like class/profession and skills or levels you are less likely to forget or are prominently placed on your character record anyway.

If you, like my group, start your games with going around the table to refresh people’s memories of who you all are, they will be more interested in your personality, you class or whatever can be expressed in a word or two as can your preference for personal protective equipment.

The hard part of NPCs is to make them unique. It is too easy to make a generic shopkeeper called Bob, or gate guard called Fred. In role-playing games any one of these bit parts could suddenly become an important actor. They could take a bullet intended for a Character or become a quest giver.

What I am suggesting is that when you have a moment of inspiration for an NPC personality, or mannerism, even a catchphrase, you put it on a green post-it and save it. Stick it on a page somewhere. Now, when you are either prepping a session, planning an NPC encounter, or just plain need an NPC on the fly, out comes the green sticky note. If you don’t need to use it, the Characters go somewhere else, they shoot first and don’t bother with the questions, whatever, the sticky goes back to be used again.

If the players never heard it, it never happened.

You can build up a library, it may only be one or two notes at first but you are likely to add them faster than you use them. As all the inspiration came from you in the first place, a quick glance is likely to bring back not only the bare facts, but how you intended to play this person as well. Unlike traditional, build an NPC and give them a personality, with this method you are guaranteed to use the personalities you create. The top post-it or sticky note is going to be the personality of the next NPC you have to role-play.

You can go one step further. Do you see that little (M) in the top corner? This personality is intended for a minor NPC (or minion). Other notes are labelled with a (B) for big (or boss). This stops you ‘wasting’ a really great villain’s personality on a disposable, single use NPC.