Stand By Me 5e Edition

Stand By Me is primarily a role playing adventure, not a hack and slash encounter. The ‘villain’ of the piece is as innocent as the victims. There are numerous ways of resolving this adventure and I am sure that your players will find more than has been envisaged here.
This is Theatre of the Mind Season II. This second collection of adventures goes beyond the scope of the first season. Theatre Of The Mind Encounters are short adventures, situations or encounters described purely in text. The setting description is kept to a minimum so they could be parachuted as easily into an Arabian Nights campaign just as easily as a Forgotten Realms campaign.
If a character’s profession is mentioned that should be taken to me the actual profession of the ‘living’ person not necessarily the character class of the same name if it exists. By that I mean if I mention a thief then I just mean someone who steals something not an NPC of the thief character class and all the associated skills and abilities. That does not mean that they are not of that class or profession. That is a choice for the DM to make when preparing the encounter for his or her players. 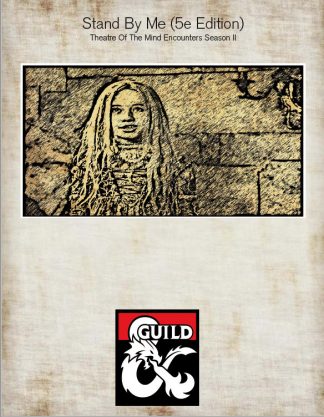 You're viewing: Stand By Me 5e Edition $0.99
Buy product
This site uses cookies: Find out more.