What is NGS?
No GM’s Sky is a game system that may be played with or without a GM. You control a protagonist that is attuned to a jump core and the crew of volunteers that choose to travel with your character and explore the fringes of human space and beyond. Some seek knowledge, others look for fortune, and who knows what mysteries will be revealed along the way. Game-wise it is kind of a reverse Oregon Trail, you jump as far as you dare and then try to return to civilization.

The scout and courier classes are small ships. Its crew consists of a pilot, a navigator, an engineer, and a gunner. Your character might fulfil one of those duties or just be along for the ride. With double occupancy, you can bring along up to four specialists to build the team.

The crew may be other player characters or if you are playing this as a solo game, they are all NPCs.

The odds are such that you’re not going to own your own ship to go zipping off into the unknown. Either a government, corporation, or wealthy patron can provide a ship. That usually comes with some strings, they’ll want to bring some of their own people and they have their own goals as well. Perhaps they want to get first crack at new discoveries or to make sure no dire threat to humanity waits for them out there. Or, maybe they have a more personal agenda…

In a GM lead game the GM will be setting the agenda and any subtext for the campaign. In a solo game these will be choices you will make.

Each Jump Core assisted jump pushes you closer to the galactic core and each jump places you a year further from home. You have it easier than the crew of the Goldenrod. They weren’t prepared for an extended trip and it was a rough ride home. Your crew has the advantage that you know at least what you’re getting into.

There is life out there, mysteries to discover, worlds to chart and explore. Some ships jump and are never heard from again (or are long overdue), others have returned and their findings have made them and their sponsors very wealthy.

Be the first to review “No GMs Sky 3Deep” Cancel reply 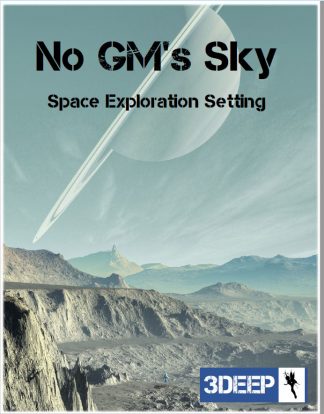