This is an alternative wound resolution system for ZWEIHANDER.

The basic mechanic is that the normal attack roll and parry/dodge checks are made but these rules replace the Fury Dice, Chaos Dice and Wound checks with a single D100 roll. The GM then looks up the result on the correct table. There are separate tables for Bladed, Brawling, Crushing, Gunpowder and Missile attacks. The tables combine the combat conditions resulting from the wound as well as graphic descriptions and of each attack.
Speed is one of the most sort after aspects of combat in role playing games. A voyage that takes the characters three months by ship we can hand wave away in a couple of minutes using Narrative Time but a fight between gangs that lasts thirty seconds can take all evening to play in Structured Time. These tables are designed to be faster at the game table by combining three or more actions into a single d100 roll and therefore make your combats fast, bloody and violent.
Inspiration for this system cones from a classic 1980s ‘drop in’ set of house rules for D&D that eventually became a game in its own right. That game went on to inspire many Critical Hit systems for the biggest games in role playing. Now you get the chance to add violent and bloody combat to ZWEIHANDER. What is unique about this critical hit system is that it does not simply presume that all foes are humanoid. The tables are customized for different body shapes to account for arms, legs, shields, wings and tails. 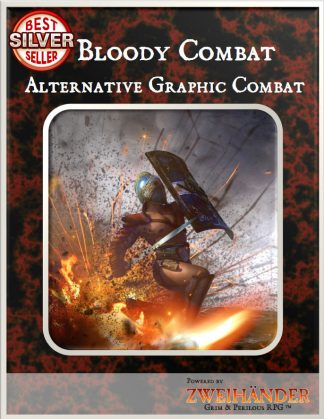